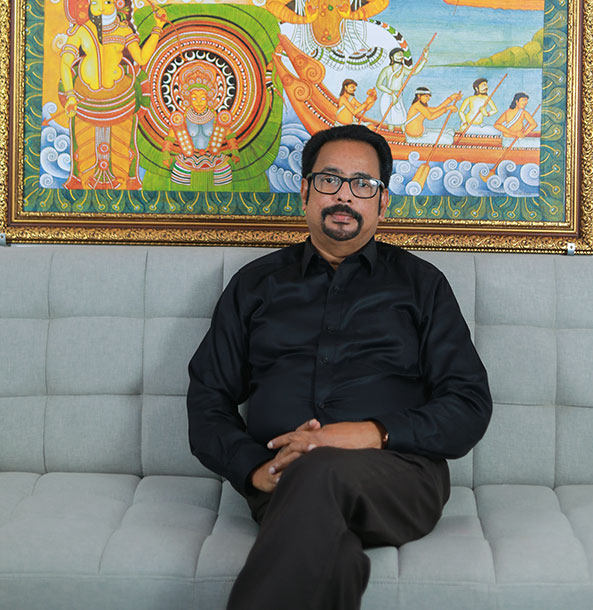 Sukumaran, Chairman and Managing Director of Motivate Publishing India Pvt. Ltd and Chief Editor and Publisher Excellence Global FZC LLC based in the United Arab Emirates, is a media entrepreneur who has launched many literary and media ventures in India, the UAE and in other countries as well.

It is his interest in literary and cultural fields during his student days that prompted Mr. Sukumaran to launch many ventures associated with the field. Be it literary magazines in Malayalam or organising book exhibitions and seminars, his passion for Malayalam and Malayalis were the fuel that propelled many of his dream projects over the past three decades.

Keeping up with the technological developments in the world, Mr. Sukumaran launched The Gulf Indians, a multi-lingual news portal, at a grand function at Hycinth Hotel in Thiruvananthapuram in January 2020. The holding company, Motivate Publishing India Pvt Ltd was also launched simultaneously with its corporate office in Kochi and branches in New Delhi, Mumbai, Chennai, Bangalore, Hyderabad and Trivandrum in India; UAE, Bahrain, Kuwait and Saudi Arabia, in the GCC, the United Kingdom, the United States and in Singapore and Malaysia in Far East.

Simultaneously, a YouTube channel of The Gulf Indians was also launched and to date it has garnered over 10,000 subscribers and more viewers. The channel features news analysis of various political and developmental issues, business and education sectors as well. The weekly business round-up by a renowned financial analysts as well as interviews of various cultural and news personalities have become very popular in a very short period.

Motivate Publishing India Pvt. Ltd has a well-appointed editorial offices as well as the latest state-of-the-art studio in the heart of Kochi, a historical city that is today the business hub of Kerala making significant contributions to the growth of the State as well as India.

The Gulf Indians news portal is soon to launch a Hindi edition and editions in Tamil, Telegu and Kannada with editorial offices in New Delhi, Chennai, Hyderabad and Bangalore.

The Who’s Who of Gulf Malayalis, launched in January 2020 by Excellence Global, is a tome featuring 2,000 prominent Malayalis in the UAE that would be a treasure trove for business and political leaders anywhere in the world. The work is an exhaustive listing of Malayalis in UAE featuring the business, professional and cultural giants in the GCC nation.

The book also features all the Malayali associations in the UAE, exhaustive services of Indian embassy and the consulate in the UAE, and about the personnel and services of Norka. More such directories are to be launched as soon as all protocols with regard the Sars coronavirus are lifted. A Who’s Who of Gulf Indians and more such directories in other GCC nations are to be published in the near future.

Excellence Gallery, a subsidiary of Excellence Global has been established recently to promote fine arts, artists, production of paintings, holding exhibition of paintings and its sales. The establishment provides a launching pad for many artists fresh out of colleges and is the right opportunity for budding artists, trained and untrained. The establishment provides the right exposure for budding creative talents. Excellence Gallery plans to hold exhibition in Indian cities and world capitals as well, in association with Lalitha Kala Akademi.

Motivate Publishing also undertakes the production of books, biographies and autobiographies in both print and digital formats. Art film production as well as corporate film production is another area that the establishment has dabbled in and aims to take up in a bigger role in the near future.

The veteran investigative and political journalist that Mr. Sukumaran is recognised the untapped potential of Malayali diaspora in making significant contribution to the economic revival of Kerala. His endeavour ever since 1985, when he reached in Mumbai where he was professionally engaged by the Hinduja Hospital in their Engineering department, was to popularise the language and literature of his home State. Mr. Sukumaran became very active in the socio-cultural world of Mumbai.

After a long stint of 13 years at the Hinduja Hospital, Sukumaran quit the job and established ‘Malayalam Media Publishers and Distributors Pvt. Ltd.’, his first business venture, to bring out Malayali directories from different Indian cities.’

The business venture in Mumbai helped Mr. Sukumar establish a name for himself in the social and cultural fields in the city and he became a known name among the community members.  He became so popular among the Mumbai Malayalees with his active involvement in Malayalam Theatrical movement, then. This led him to found Natyakshetra, an amateur theatre group, and kept him engaged in theatrical activities and writing for many current mainstream Malayalam publications.

Along with his publishing venture, Mr. Sukumaran was also involved in printing and production of various publications as well as in the field of public relations, corporate film production and event management.

Ever on the lookout for new challenges, Mr. Sukumaran successfully got a US visa (B1- B2) and launched the work of US Malayali Directory from New York. Along with that he started his Gulf venture with a residential visa from Dubai under the banner of Excellence International Media and Publishers LLC.

All these directories, in both print and electronic formats, are available at all book stalls across the world and are a great source of information about the Malayali diaspora.

An avid reader and his passion for Malayalam literature forced Mr. Sukumaran to start a book club, Malayalam Book Club, in 2007 to promote reading habit of Malayali diasporas. The Book Club, having a membership base of over 1,000, offers delivery across the globe.

Mr. Sukumaran was a regular contributor to many little magazines in Malayalam with quality literary outputs. He has published more than 800 articles during this period. In 1992, Sukumaran started a Malayalam monthly news magazine called Malayalikalude Malayala Naadu. From 1997 Sukumaran, as the Chief Editor, began publishing another magazine called “Pravasikalude Keralam”. The company also published biographies, short stories, poetries of prominent non-resident Keralites. The first ever Malayalam poetry translation of Narayaneeyam was published by Malayalam Media.

The veteran journalist is the recipient of “Malayala Shabdam Award” and “Khazzack Award” for his contributions to the Malayalam journalism as a Non-resident Keralite. Many national English and Malayalam dailies and television including Asianet, Kairali, Amrita and Jeevan had interviewed him.

He was also the Chief Editor of one of the reference books in Malayalam entitled ‘Malayala Sangeetha Smaranika’ published by Raga Sudha, Mumbai.

Mr. Sukumaran had interacted with many stalwarts in the Malayalam literary field and had interviewed many celebrities from the fields of Politics, Literature, Art and Culture. All these interviews were highly notable and threw light on the personalities a closer to the earth angle. 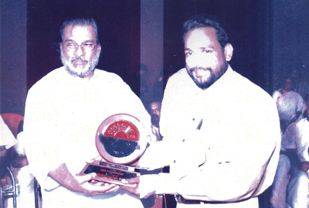 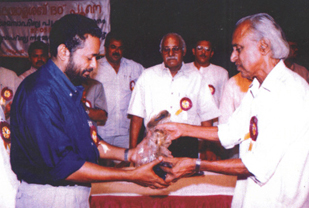 WHO'S WHO OF
GULF MALAYALIS